Close to Nothing - A Postmortem (or Perimortem)

Close to Nothing was my first publicly-visible piece of interactively fiction, and I guess it was also my first published piece on Itch as well. I used to dabble a lot in other platforms, such as Inform 7 in the past, but the stuff I'd shared were still not public. At first, I wasn't even sure if I should publish it on Itch.io at all, that my stuff wasn't good enough, but friends had talked me into going ahead with it.

I'd decided pretty early into writing it that I'd have three endings, and that the game would be broken up into different days. While save systems are always frustrating to deal with (especially in HTML,) I still felt splitting the game up into chapters would help both those reading the story, and myself in pacing out the story beats.

The working title was 'There Is Nothing,' which still shows up in the game via the sidebar on occasion. I decided to go with a mild pun for the release title instead, though. The photos used are from a trip I'd been on to Hobart, as well as a couple of ones taken around the house, and one supplied by a friend.

It's not said explicitly (though some locations are name-dropped,) but the game is set in Hobart. It started out as a settler port propped up by the prison colony of Port Arthur and the brutal treatment and killings of the Palawa. In the late 19th century it was around the size of Melbourne and Sydney. With the closure of the prison colonies in Tasmania/Lutruwita, the city completely stagnated, with the modern day city being this odd collection of really old buildings and monuments. It put me in mind of a lot of small towns seen in fiction, with a long and dark past that's somehow inexplicably cut off from the world outside it. 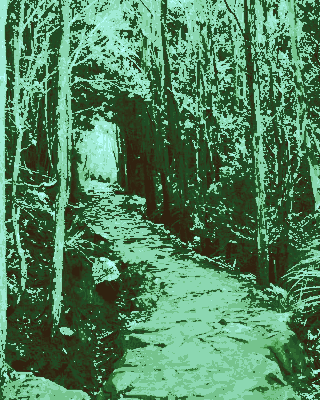 This was the first time I'd really started to learn HTML and CSS, and I'd come into a few pitfalls along the way. While my intent was for the game to run smoothly on all platforms, I did not consider how the sidebar would appear on mobile screens, and I'd only learned after writing the first ending that the sidebar took up most of the screen. My work-around was simply to remove the sidebar on screens with a small width, though if I'd worked on it today, my solution would probably be to make the sidebar more dynamic. But hey, there's nothing stopping me from releasing another update, right?

One thing I've been told I should improve on is self-promotion, which I still struggle with. I would only feel comfortable even posting on my Twitter feed about the game after a major update, for example, and I'd just tend to be very dry with my descriptions of the game. I've improved a little since, especially with how friends have been more confident with promoting my stuff.

The ending I'd gotten the most positive feedback on was the second one. I'd made a conscious choice to write this one second, because it was always going to be the darkest ending, but I was surprised by the positive feedback I'd gotten, and I guess a lot of that was due to mixing in worldbuilding details with bits and pieces of the real world. I've just always loved when games go on tangents about these things. (AN: I was going to list some games as examples here but I AM TOO EMBARASSED TO.)

This was my first publicly-released game I've ever made, and I hope that you enjoyed it. ^^

List of things I've learned through making Close to Nothing:

A Romance in Horror